Painting eggs for Easter in Bucovina

For the Orthodox Easter we suggest learning the craft of decorating Easter eggs in a village where not only eggs are beautifully painted, the houses and clothes have the same motifs!

We suggest a 5 days trip to discover the Orthodox Easter traditions, visit the painted monasteries from Bucovina and enjoy a wonderful countryside setting.

Accommodation, food and roundtrip local transfer included for 350 EUR per person. If you'd like to travel longer in Romania we can help you create a longer trip plan. 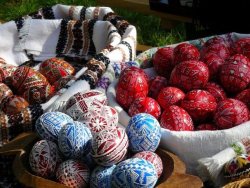 Transfer to Ciocanesti and getting ready to explore the village. We suggest visiting the village museum which is actually an inhabited house; the owner opens the door to anyone wanting to see it. She is happy to reveal an entire collection of carpets, rugs and towels hand-made by her during her entire life. This is also the last day to learn how eggs are painted so you better roll your sleeves and get to work alongside a local. To get some inspiration you can pass by the local painted eggs museum. 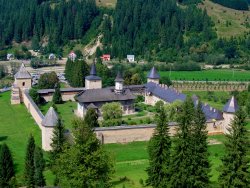 Next we discover that in Bucovina monasteries are painted as well, something unique worldwide, consequently 8 of them being UNESCO World Heritage sites. They are painted both on the inside and outside with frescos which at the time were meant to tell biblical stories and educate the illiterate. Nowadays, they are well preserved and we suggest you visit at least 2 or 3 them like the ones at Sucevița, Moldovița and Voroneț, famous for its blue color. Since they were built in the 15-16 centuries and there was a threat of destruction during battles, defensive walls were built around the monasteries. 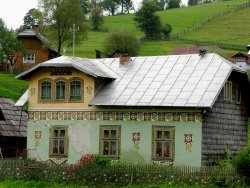 This is the busiest day for Easter preparations and we suggest you join your host family for preparations. Lamb meat is preferred for this occasion so a lamb is sacrificed by each family. Besides that you get to see how pasca is made, a traditional Easter coil. In the evening everybody goes to the church to participate at the resurrection mass, at the end the priest sanctifies the food brought by locals. 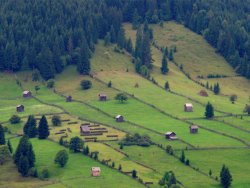 In the morning you’ll have children visiting and making Easter wishes and in return they receive painted eggs. After that, the Easter meal is served, more like a brunch and the table will be filled with food the whole day, plenty of goodies to try, we especially recommend “drob”, a sort of pate and of course the lamb steak and eggs. For the rest of the day we suggest you enjoy a relaxing day in the village or even go for a hike on the nearby mountains, just as nature comes to life. 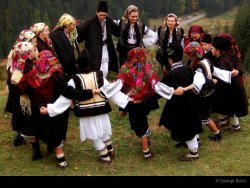 Rich breakfast, relaxing morning and transfer to the airport.

The holiday can be organized for a family or a small group and the duration is flexible. If you have more time we advise to also visit the Maramureș region to the West of Bucovina or go South-West towards Transylvania, we can help you organize a longer trip.

One option is to "add to trip plan" this holiday and then go to the "Tailor made" section where you can choose more regions to visit and things to do and send us an inquiry. Or you can simply write us an email at info@viatransylvania.com, tell us what you would like to do more, and we'll discuss it with you further. 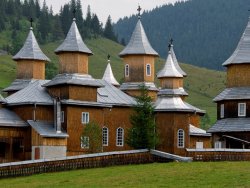 The village of Ciocănești is situated in the historical region of Bucovina, being also nicknamed the living village museum. It looks like a museum but in reality it's a real village where people live normally; it is surrounded by mountains, a river winds through and in the nearby forests the enigmatic “huțuli”, or people of the forest, live.

When speaking of Bucovina (or Bukovina) these days we better speak about Southern and Northern Bucovina as one of them is in Romania and the other in Ukraine, being separated by historical events in the 20th century. We’ll refer mainly to the Romanian side but, as you can imagine, the population is mixed and besides Romanians and Ukrainians one can find Germans, Jews, Poles, Hungarians, Russians and Gypsy.

The name actually comes from a Ukrainian word, “buk” which means beech tree; even today you can find plenty of beech forest in Bucovina. In the 14-16 centuries in Bucovina were located the rulers of the medieval Moldavian Principality, a local river actually giving the name to the entire territory. The most famous among these rulers was Stephen the Great who, as the legend goes, built a monastery for every battle he won, inspired by Byzantine architecture, local customs, traditions and beliefs. Later on Bucovina had a tumultuous history having been subject to conflict between neighboring empires and states, latest episode being with former Soviet Union when it was split in two between what is now Ukraine and Romania.

Many traditions are kept alive in Bucovina and the most important and well known one is the decoration of eggs before Easter, also common in Ukraine. Even the famous Fabergé eggs are part of the same tradition; they were done by famous jewelers as a gift to the Tsar’s family between 1885 and 1917.

The painted eggs from Bucovina though they cannot compete in luxury with the famous Fabergé eggs, they surely compete in beauty being decorated manually. There are two main methods for decorating them, with brush and paint and the second with wax, both spectacular and requiring a lot of attention and dedication. But, in the end, the result is a joy for whoever wants to try.

In a rural guesthouses in Ciocănești, owned by locals, classified with 3 flowers, each room having private bathroom. Rooms will be booked once a reservation will be made from your side, we do not book rooms in advance.

Meals are cooked by traditional recipes and most ingredients come from local farmers. The food is very tasty as it is grown by traditional farming methods. For Easter you will get to try some dishes cooked only for this ocasion.