Discover scenic countryside and quaint villages with fortified churches, all while enjoying the magic of cycling in Transylvania.

The highlights are 6 UNESCO World Heritage sites, the medieval citadel of Sighișoara and the fortified churches in Prejmer, Dârjiu, Săschiz, Viscri and Biertan.

This is a small group tour and includes 280km on the bike, full board, equipment, transfers and guide. We can easily further tailor it. 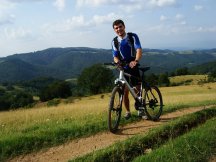 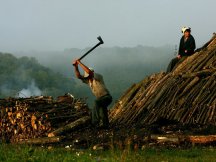 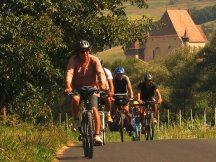 About the fortified churches of transylvania

When Mongol invasions were threatening Europe in the 13th century, in order to protect Transylvania and Europe, Saxons were brought to inhabit, fortify and defend the region. This is how fortification walls were built around churches in 300 villages and they are now known as fortified churches. 150 of these churches still stand and 7 are UNESCO World Heritage monuments. After 8 centuries of living here, the Saxon community left Transylvania in late 20th century, being sold by communists to Germany. A fascinating story to be heard, in a truly magnificent setting, join us!

We start our trip from Brasov and bike to the nearby village of Prejmer, home to a magnificent fortified church, the biggest of its kind in Romania. Later on, at Harman we meet craftsmen who restore organ instruments for Catholic churches, a good chance to learn about their significance and state of conservation of the Saxon churches.

We transfer to Saschiz and start biking from there. We will wander through the charming landscape full of meadows and small forests to arrive at Darjiu fortress (locals call fortified churches fortresses ). Darjiu fortress is famous for its mural paintings, made by a famous local artist from medieval times, Paul of Ung, inspired by both the Italian Renaissance and the Gothic styles. The route of the day will be quite different form the rest, because it passes mostly through the land of Szekelers, Hungarian ethnic group inhabiting this part of the country from the same time as Saxons.

On this day we ride the thematic Saxon trail through the woods to arrive at the beautiful small villages of Crit, Mesendorf and Daia - special due to their isolation. We admire old Saxon houses in ruin and compare them to the ones in Viscri, where through a major conservation project, many of the houses have been renovated. Even HRH Prince Charles of Wales owns two houses in Viscri and visits almost yearly. The majestic white church actually gives the name of the village, Weisskirch in German, simplified to Viscri in Romania. Nearby Viscri we will visit charcoal makers, bee keepers and weavers, crafts and practices that have existed since the very beginnings of the community.

After transferring in the morning to Prod, on this day we will visit the ancient Breite oak forest reserve that holds lot of mystery and wild life. After we return to Prod, you can choose to do some horse riding at the local stable. In the evening we will visit one of the best preserved medieval towns in Europe, Sighisoara, also associated with Vlad the Impaler (also known as Dracula).

Our adventure in Transylvania continues on the 5th day with Copsa Mare and Biertan. Having two of the biggest Saxon fortified churches, these villages were once rivals. We will enjoy a relaxing picnic lunch on the top of a nearby hill, admiring the panoramic view of the region. A lady weaver from Copsa Mare will show us her masterpieces, made with great efforts during her entire lifetime. We will dine in a Saxon house to experience true local hospitality.

In Richis we will visit the fortified church and meet the last Saxon form the village who, unlike others, decided to stay in the land of his childhood, having a captivating life story. We will slowly head to Prod, where we can do some more horse riding at the farm. A well-deserved relaxing time will wait for us at the end of the day.

Relaxing morning in the village, saying goodbyes and transfer to Bucharest. Should you be interested in spending more time here, getting a deeper understanding of the local culture and visiting more traditional locations, explore our 8-days Guided Transylvania tour - Castles and medieval towns!

In rural guesthouses owned by locals, classified with 2 or 3 flowers.

Meals are cooked by traditional recipes and most ingredients come from local farmers. The food is very tasty as it is grown by traditional farming methods. Lunch is usually picnic or sandwich.

During the tour we will travel daily by bike. We will also have a car to transfer luggage and for assistance.