The epistolary fiction novel "Dracula" was written by 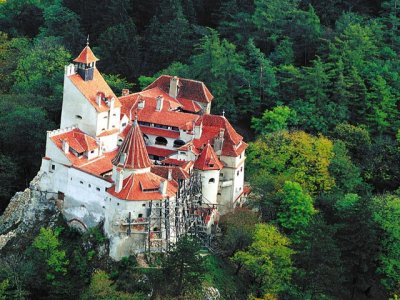 Irish author Bram Stoker in 1897. Even though Dracula was a fiction hero, the character image was borrowed from Romanian history and refers to a real person Vlad III Țepeș, Prince of Wallachia, who is commonly known as Vlad the Impaler for his cruel treatment of invaders, especially Ottoman Turks.

Ever since, Dracula and Dracula's castle became symbols of Transylvania popularizing the medieval land and its mystery.  Vlad was born in Sighișoara and as a ruler lived at Poenari Castle, but traditionally Bran's castle is considered to be his residence in accordance with the descriptions of the novel's misty mountain region.

Transylvanian land, garlic and sunlight are considered to be weapons against Dracula's superpowers. Coincidentally those attributes are a part of the traditional lifestyle of modern Romanians.

To see Vlad Țepeș's birthplace and castle we can organize for you the "Transylvania's castles" itinerary.

Alternatively you can plan self-drive tour for your family or group of friends.